Lest We Forget: Commemorating France’s Survivors 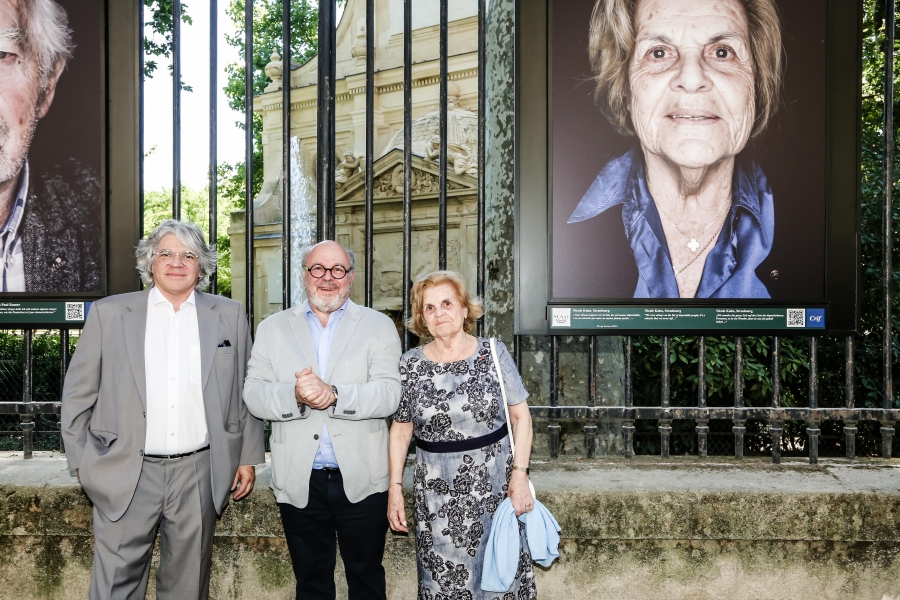 On July 11, the French Senate and the CRIF, the umbrella organization representing French Jewish organizations, launched the opening of “Lest We Forget”, a month-long exhibition of portraits on the railings of the Luxembourg Gardens in Paris , to commemorate the 80th anniversary of the Vel d’Hiv round-up of French Jews in 1942.

ICJW representatives Nicole Kahn and Evelyn Askolovitch were among the 42 survivors who were photographed by Luigi Toscano for this unique exhibition. Their portraits are shown on the railings around of the park and under each portrait is a code that leads to their individual stories.

Evelyn and her parents were deported from Holland and experienced 3 concentration camps. Nicole’s family was arrested in Marseille in 1944, both for being Jewish and for their involvement in the Resistance. Fortunately, they are both alive and well today.

Evelyn is active telling her story in schools and universities and fighting Holocaust denial. In 2018, Nicole was chosen by the international Lonka photography project to represent French Shoah survivors. That exhibition, shown in many cities, is presently on show at the Jewish Museum and Tolerance Center in Moscow.

The “Lest We Forget” exhibition is one of a number of events taking place in France to  commemorate the 80th anniversary of the “Rafle du Vel d’Hiv”, the roundup of 13,152 Jews over two days – July 16-17, 1942. It was only in 1990 that a photo of the event came to light, showing a line of buses that transported men, women, elderly and sick people, and 4,000 children to the huge sports arena.

Jews of Paris and surrounding areas were picked up and tracked down solely by French police, following orders from the collaborating Petain government. After 3 days in nightmarish conditions,  without food and water, they were deported to Nazi camps. Children were separated from their mothers and sent separately to Auschwitz. None of the children, a majority born in France and thus French citizens, survived.

It took many years for France to remember and recognize these painful events. President Jacques Chirac broke the silence in his historic speech in July 1995, admitting France’s responsibility in deporting its Jews.

Evelyn said: “Today we are 42 women and men hanging around the bars of the Jardin du Luxembourg, photographed by Luigi Toscano, partly representing during 1 month the still-living survivors of the Shoah: Lest we forget!

“I am one of them, having been in 3 concentration camps, deported from Holland to  Vught, Westerbork and Bergen Belsen, and I survived. I tell my story in schools, universities, and projects in order to show that the Shoah happened! That’s why I can be seen, with my comrades, by the children, their parents and grandparents, and by tourists when they visit the wonderful gardens of the Jardin du Luxembourg, to play and be happy!

“At the reception in the splendors of the Senate, by chance I was sitting next to Nicole Kahn, another survivor. It’s a small world in which we, representing ICJW in international organizations, are living and showing we are alive and well!”

You can find more photos and information on the site  http://www.crif.org/fr/media-gallery/detail/84705/82524  (Event photos by Vartan Tanelian)