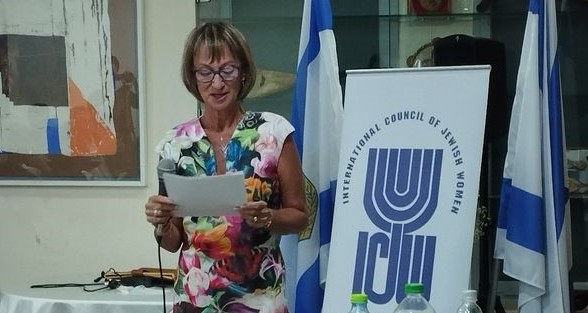 On May 25, 2022, Lilian Grinberg from Mexico was inaugurated as the President of the International Council of Jewish Women (ICJW) for the next 4 years.

Lilian was born in Mexico City as the youngest of three sisters. She studied at the Colegio Israelita de Mexico from 1965-1980 and was a leader in the local Jewish Girl Scouts. In 1980, she spent 6 months in Israel on a leadership training course before studying for her degree in Special Education at the University of the Americas. She also took a diploma course to teach languages and taught Yiddish for six years at the Colegio Israelita de Mexico.

Lilian has always been interested in helping those who are most in need. In 2007 she joined the VJM, and she has also been active in WIZO Mexico and Make a Wish Mexico. She lives in Mexico City with Sergio, her husband of 39 years. They have two married sons and five grandchildren.

The VJM was established in 1993 as a way for Mexican Jewish women to give back to the country that welcomed their grandparents. The women who volunteer with the VJM are dedicated to helping impoverished Mexican communities. They raise money for the Mexican Red Cross with the support of Jewish schools and volunteer groups. They visit and support four Mexican hospitals, two homes for the elderly, a center for at-risk youth, and three schools for children with disabilities.

One of the ground-breaking projects is Project Magic, the Occupational Therapy Program through magic tricks, which runs conjuring workshops in several rehabilitation centers for children with disabilities. While learning to do magic illusions, the children are practicing their rehabilitation in a fun manner. They forget their disability and the pain that they experience during their rehab exercises. The children enjoy the tricks because they are fun and different. The idea of this workshop is to implement therapy and attract attention by performing a magic trick that others cannot do. This gives the children a sense of self-worth, self-confidence and power. They acquire the motivation to do other things, and it enables them to attract attention through their accomplishments rather than because of their limitations. Project Magic was created by internationally renowned illusionist David Copperfield and is run by volunteers around the world.