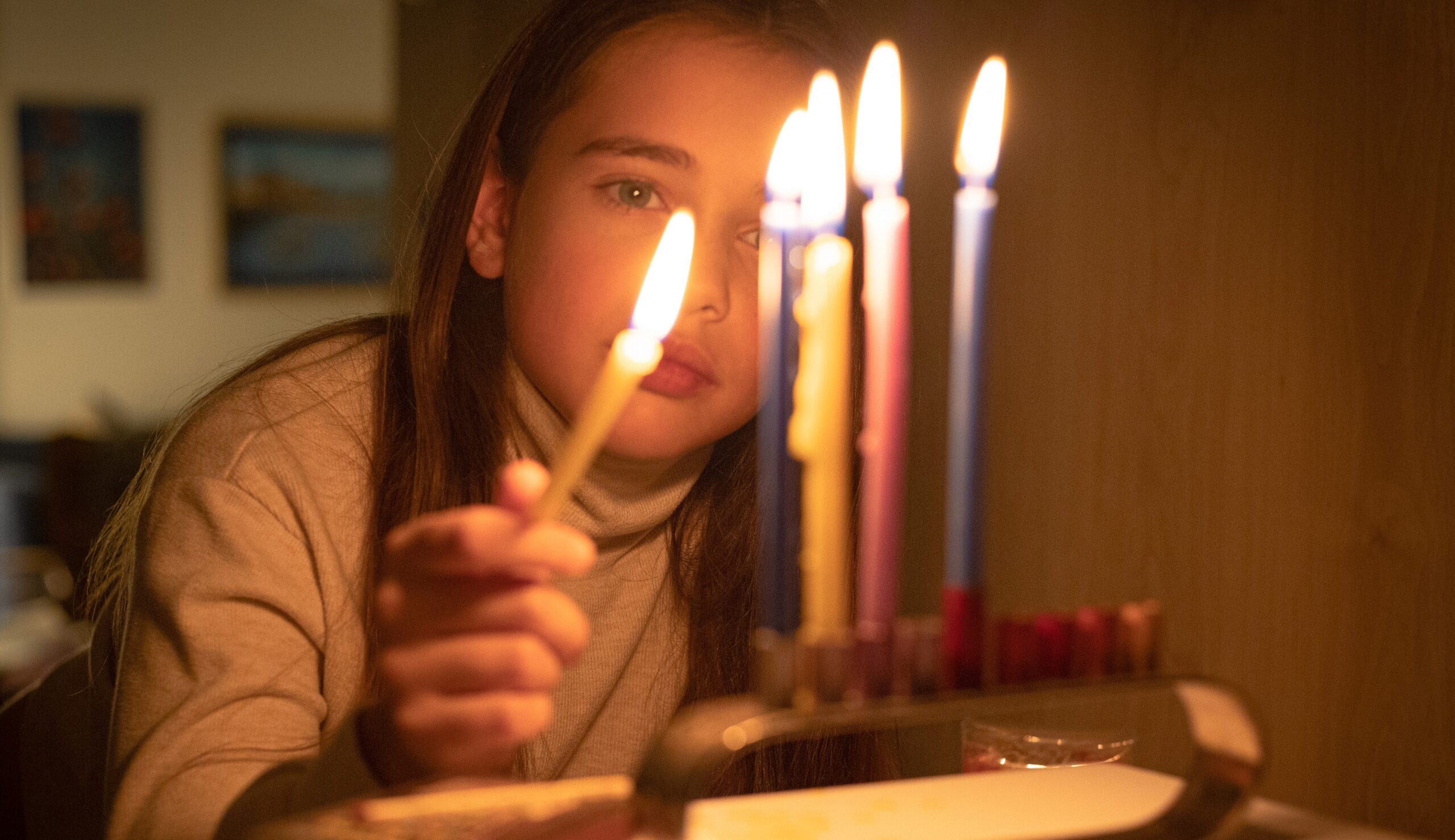 Chanukah is one of the most distinct holidays in the Jewish calendar. It is a national holiday commemorating the victory of the Hasmonean rebellion over the Assyrian Greeks during the Second Temple period. Chanukah is a holiday of civil uprising and struggle for the establishment of Jewish sovereignty in the Land of Israel. This holiday expresses Jewish resolution and courage to overcome Greek efforts to annihilate Jewish individuality, in favor of Assyrian Greek cultural universality and the enslavement of the individual to the extrinsic and physical.

Chanukah is a holiday of light, happiness and gratitude for the re-institution of the holy work in the Temple and the miracle of the small cruse of oil [with enough oil to last one day, that lasted eight days]. Over and above the military and physical victory of the Hasmonean reign (completed on the 25th of Kislev), this is an educational holiday. Chanukah derives from the Hebrew verb Ch.N.Ch. meaning education), symbolizing the victory of the spirit and the reinforcement of the ethos of Jewish spiritual bravery. The fact that it involves lighting candles adds a special mystical and spiritual dimension.

The preservation of Chanukah in Jewish national awareness is an example of the way that any collective memory should be preserved.

The discussion on preserving memory is a key discussion in the Jewish world. Memory is one of the elements comprising a coherent identity. These days there is a significant debate about the preservation of the memory of the Holocaust. It seems that the preservation of the memory of Chanukah, according to the Mishnaic and Talmudic sages, contains several fundamental elements, which can teach us how to turn the memory of the Holocaust into a historical memory with timeless significance.

Psychologist Aaron Antonovsky, who developed the Salutogenesis Model in psychology, claimed that a sense of coherence is a personality tendency, expressing the level of a person’s basic and on-going confidence that what happens in his inner or external environment is expected, understood and can be explained. Therefore, the sense of coherence has three main elements, and for the purpose of our discussion correlates with the story of Chanukah in the “Al Hanisim” prayer said on these days:

A sense of coherence involves mental, emotional and motivational elements, and empowers a person to cope with challenges, crises and stress. Negative memories might damage one’s sense of coherence, while positive events and memories might strengthen it. The special ceremonies, prayers and blessings on Chanukah express and explain to the believer the way that God manages a world of darkness; how is it possible to explain and understand darkness, what meaning can be attributed to darkness and light; how one should act and what is the significance of one’s actions. The “Al Hanissim“ text outlines the collective memory, constructs the believer’s sense of coherence over many generations, and is transported through a process of initial socialization as a fundamental text, already from one’s early childhood years.

In fact, for many generations the Jewish victory over the Greeks and the miracle of the cruse of oil have become fundamental elements that comprise the coherent identity of both the individual and the nation. The sense of structure, management and meaning have been strengthened through a symbolic system (chanukia, oil, light) that intends to intensify the sense of coherence and methodically structure the memory.

There are four main elements that have given Chanukah the status of eternal memory:

Memory is not a static product that is transferred from one generation to the next, but is designed in an ongoing structured and dynamic process. Regarding Chanukah, it has changed and re-formed throughout the years, according to the varied circumstances of the zeitgeist. The Zionist Movement, for example, re-formed Chanukah and used it as a starting point to justify and outline the Zionist narrative, such that non-religious Zionist populations also sense a connection, identify with the holiday’s messages and the main motifs embedded in it, and light Chanukah candles (according to annual surveys).

In retrospect, it would have been a fascinating challenge to be an educator during the Hasmonean period. This was a period of prosperity and blossoming, but, on the other hand, a period of spiritual degeneration. It was a period of ideological-religious introspection of the religious believer’s personal limits, and of his ability to bravely stand up to the temptations to which he was exposed in the ecosystem within which he lived and worked. Jews at that time were torn between their personal commitment to observing Torah and mitzvot and the unlimited possibilities open to them for social, economic and cultural integration into the wider world.

With its universal character, Greek culture called for total integration and assimilation into the majority culture. The enlightened culture was perceived as darkness by believing Jews, and the darkness became light. Youngsters were torn between a yearning for connection and affiliation to Judah the Maccabee, who was perceived as an extremist, and possibly a fundamentalist, who called out: “Who is for God must join me” and a strong longing to integrate into the Greek culture, which had a refreshing and intoxicating fragrance of a “new spirit” that swept the masses after it. Young women at that time were drawn between their desire to identify with Hannah and her seven sons, who, out of sincere faith sacrificed her children and refused to bow down to a statue, and Judith, the feminist who acted with initiative and resourcefulness that brought the decapitated head of Holofernes, Nebuchadnezzar’s Assyrian military minister (according to the book of Yehudit) to the camp of Israel. This was a period of extreme ideological and social fragmentation, the signs of which we experience to this very day.

The preservation of Chanukah and the perpetuation of its memory are the result of a process of socialization and systematic inter-generational transmission of the holiday’s educational messages, which include a firm stand against the encroachment of external enslaving forces, in favor of the construction of an authentic Jewish identity that contains elements sanctifying inner liberation from the enslavement of the soul to external and unimportant objectives. Chanukah symbolically expresses the Israeli nation’s journey and search for the small cruse of oil to cleanse the Temple …

Even today, at this time, we are living in an era of dimming lights and loss of direction, and particularly in a state of confusion between what is significant in life, and what is not. The question is whether we will succeed in extracting our inner candle that will light the way for us to perform Tikkun Olam.

There is a difference of opinion between Beit Shammai and Beit Hillel regarding the manner of lighting the candles of the Menorah; does one “light and decrease” or “light and increase”? In other words, do we light all the candles on the first day and reduce the number of candles each day, or perhaps, in a systematic constructivist process, do we add a candle each night until we light all the candles of the chanukiah? Our sages claim that the dispute between Beit Shammai and Beit Hillel underlies two distinct educational concepts regarding the question of how to deal with evil in this world: should we “burn the club down” and slowly “extinguish the flames” or should we gradually add light until darkness is eliminated. The Halacha ruled according to Beit Hillel : “One lights and increases”, which means that adding light and more light and more light will bring the greatest light to the world.

Empirical studies show that success in education is achieved by adding good. The battle for the individual’s spiritual freedom and purification of his soul, in anticipation for liberation from slavery and exile, triumphs by adding light. May we always know how to add light and free ourselves from the chains that hold us down from achieving inner freedom and purity. Even in our times we need a small cruse of oil to cleanse the temple of our souls.