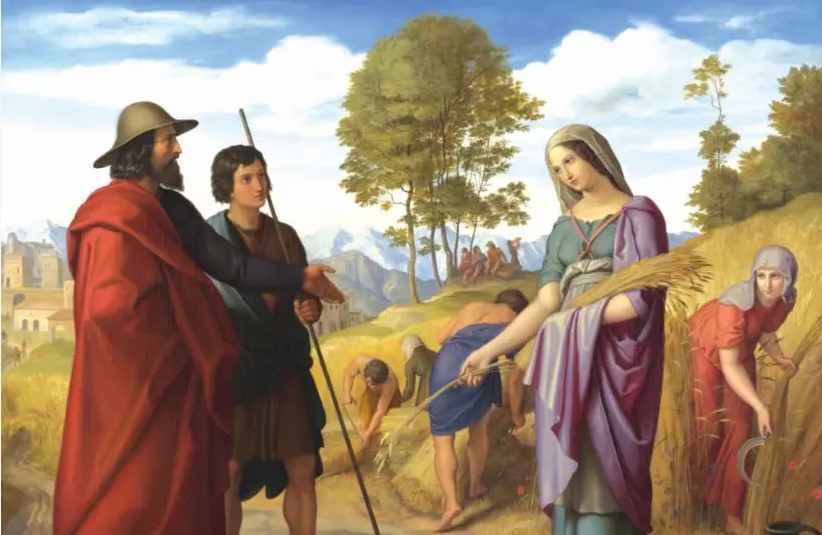 When we celebrate the festival of Shavuot we read the Book of Ruth. Many commentaries have been written about this book, analysing Ruth’s special character, but I would like to focus our discussion on the issue of hope.  Naomi and Ruth, the two heroines of the book, are the mothers of hope.

When Naomi loses everything, her property, her husband and two sons, she advises her daughters-in-law to return to their homes and their people.  When Naomi decides to return to her home in the Land on Israel in response to the tragedy she has experienced, she says: “Turn back, my daughters; why will you go with me? Are there still sons in my womb, that they may be your husbands? Turn back, my daughters, go – for I am too old to have a husband. If I should say I have hope, if I should have a husband tonight and should also bear sons.”

The words, “I have hope” express a decision. This is not naivety. It is an optimistic strategy for personal rehabilitation. It is a decision based on a realistic analysis that people are truly able to extricate themselves from difficult situations through action and agency.

In his book, Man’s Search for Meaning, Victor Frankl relates that in the Holocaust, people who lost hope failed to survive, while those who developed strategies of hope survived the war and recovered.  Words create reality and meaning.  Naomi’s words, “I have hope” created a new reality of hope.

In the Book of Job, (6:11) Job says “What strength do I have, that I should hope? And what is my end, that I should prolong my life?” According to the commentators, Job is saying that he cannot endure great sorrow that is not followed by hope in this world.  A person without hope will not be able to survive.  At the Anne Frank House in Amsterdam, there is a testimony of a woman who saw Anne Frank for the last time. Anne told her that she had heard that her entire family had perished, so she lost all hope and she died of typhus the next day. As long as she had hope, she survived the disease and hung on to life, but the moment she learned that she no longer had a family she interpreted this as the end of the world, destruction and hopelessness, and was unable to survive. The same friend said in her testimony that if Anne had known that her father had survived, she might have managed to survive and live.

The Book of Ruth teaches us that hope can be realized through action. Naomi sees that Ruth is determined, “When she saw that she was determined to go with her, she stopped speaking to her” (1:18). The commentators say that she had the courage to be determined. Both Ruth and Naomi are working to realize hope. Hope is a self-fulfilling prophecy. Ruth says, “I have hope.” She will not receive the hope from her grandchildren or her children or from something extrinsic but rather from her own action. She builds herself a channel of hope for herself and realizes it through action.  Studies of people with PTSD have found that those who have managed to overcome it are those who have built for themselves a new channel for life, a biography and a new alternative narrative of hope. This is what makes it possible for them to get up in the morning and move forward.

The Book of Ruth is a story about building a consciousness of hope through action. Building resilience through positive psychology.  If we examine Ruth’s biography and roots, we find that she is descended from Lot’s seed.  The Book of Genesis relates that after Sodom was destroyed, Lot’s daughters were certain that they were left alone in the world, and they decide to revive him. They do not lose hope. They sleep with their father in order to continue human existence after the catastrophe and destruction.

Genesis 19: “And the firstborn said unto the younger, Our father is old, and there is not a man in the earth to come in unto us after the manner of all the earth …. Come, let us make our father drink wine, and we will lie with him, that we may preserve seed of our father… And the firstborn bear a son, and called his name Moab: the same is the father of the Moabites unto this day.

Ruth’s origins are from Moab and from the proactive activity to continue humanity. Ruth, who is from the seed of Moab, continues to produce the consciousness of hope that lies within her DNA.   In the Book of Ruth, one can see that Ruth performs a sequence of actions for which she is even rewarded, as it is written: Chapter 2, Verse 12

“The Lord repay your work, and a full reward be given you by the Lord God of Israel, under whose wings you have come for refuge.”

The question is, what is the connection between the Book of Ruth and the festival of Shavuot? The Book of Ruth was written by Samuel in order to teach David about his pedigree and give him hope and resilience. Ruth’s grandson, David, King of Israel, was in a state of total despair. He was ostracized because his brothers suspected he was his mother’s bastard. At a time when it was known that her husband Yishai had left her, one night she exchanged places with the handmaid and slept with him without his knowledge.

For this reason, David was suspected of being a bastard and his brothers ostracized him, as he says “I am become a stranger unto my brethren.” (Psalms 69:8). David’s mother initiates the pregnancy and birth but the unknowing environment suspects David and makes his life miserable. In his despair, David seeks hope. His brothers banish him and Saul persecutes him, and the entire Book of Psalms is full of prayers, supplication and an explicit request for hope.  For example:

Psalms 27: The Lord is my light and my salvation; whom shall I fear? the Lord is the strength of my life; of whom shall I be afraid? When the wicked, even mine enemies and my foes, came upon me to eat up my flesh, they stumbled and fell. Though a host should encamp against me, my heart shall not fear: though war should rise against me, in this will I be confident. Leave me not, neither forsake me, O God of my salvation.  When my father and my mother forsake me, then the Lord will take me up…. Deliver me not over unto the will of my enemies: for false witnesses are risen up against me…. Wait on the Lord: be of good courage, and he shall strengthen thine heart: wait, I say, on the Lord.

David could have sunk into despair but chose hope and created it. David’s motto is “Wait on the Lord: be of good courage, and he shall strengthen thine heart: wait, I say, on the Lord” which means there is hope but it is firmly linked to “be of good courage” which means that effort and action are needed in order to survive.  The Book of Ruth and the chain of events that it subsequently engendered can be seen as an intergenerational transfer of the legacy of hope and the need for effort.

Perseverance and courage are essential. After the destruction and the Holocaust, it was easy to enter a state of great despair, but those who built themselves a channel of hope survived and created a meaningful life for themselves, and this included the building up of the newly established State of Israel.  The Book of Ruth is a book of hope – the hope of two courageous women who chose life and together founded a royal dynasty.

We are in the days of post-COVID-19, with fears for the future of the world in the face of the never-ending war in Ukraine, great fear for the future of Europe, fear of a major escalation in terrorism and bloodshed in the Middle East and fear of new pandemics. And just when we thought that the COVID-19 pandemic was over, “monkeypox” disease suddenly appeared and is threatening our lives. We are also in the midst of a climate crisis that is about to destroy entire regions of the world and may even cause continents to disappear altogether.  From the Book of Ruth, which is read on Shavuot, we learn that we must not fall into the depths of despair. Instead, we must produce hope.

From Ruth and Naomi and their groundbreaking activity, we must learn the stages of producing hope and the secret of its existence. The main thing that we must understand is that hope is not heaven-sent and is not created spontaneously. It is created through a profound and intense process of creation, activity, effort and hard work. From the Book of Ruth we learn that women have a special sense and a proven ability to create hope.

May we enjoy good health, contentment, and happiness, and lots of hope so that we will create with our own hands a better reality and “tikkun olam” (the Jewish concept of repairing the world).