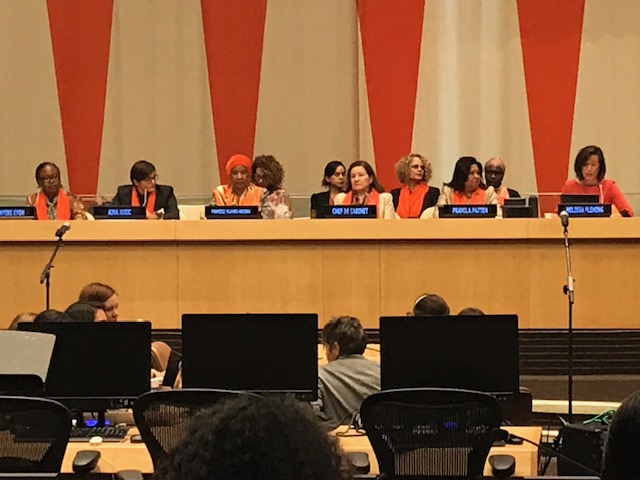 UN’s UNite Campaign to Eliminate Rape and Violence against Women and Girls.

ICJW representatives Fran Butensky and Madeleine Brecher report on the United Nations’ Official Commemoration of the International Day for the Elimination of Violence Against Women and Girls on November 25, 2019.

On November 26th, at UN headquarters in New York, hundreds of grassroots advocates wearing bright orange scarves honored survivors of rape and violence, and pledged to stand with them for a brighter “orange future”. The commemoration focused on sharing uplifting personal stories and successful political and humanitarian solutions.  We thought it would be most meaningful to share two of those stories with you.

Ms. Ajna Jusic is the President of the Association “Forgotten Children of War” from Bosnia and Herzegovina. During the ethnic war in her country, her mother was raped and Ajna is the product of that sexual assault. Her mother raised her daughter with great love but she was forced to cope alone with no support from anyone and to make matters worse, she was shamed and humiliated by her community. Her mother hid the circumstances of Ajna’s birth until she was a teenager and Ajna, now age 26, has had to live with the trauma of not knowing anything about this person who was her father. She promised her mother that she would work to make the world better for future children born out of war; the “Forgotten Children of the War” Association represents Ajna’s effort to make good on that pledge.

Mr. Jonathan Torgovnikis is an award-winning photographer, educator and Emmy nominated filmmaker. He decided to use photography as a catalyst for social change.  He showed us, through photos from Rwanda, how rape was used as a weapon of war.  Through his photos, he followed the story of a 16year-old girl who lost her entire family from the carnage only to survive and be continually gang-raped every day for six months. She, like so many other young girls, became pregnant and a victim of HIV Aids, shunned by the community and ostracized. Mr. Torgovnikis used the power of the media to make social change by publishing his photos and the victims’ stories. With this awareness and Call to Action, one quarter of a million dollars poured in from the first responders, which made it possible to help and support over 800 Rwandan families.

We all acknowledge that sexual violence cases are the hardest to prosecute. But, progress is being made through the training of social workers, law enforcement, the courts and the medical community and engaging men and boys to speak up and engage other men and boys. We must direct the stigma away from the victim and toward the perpetrator.

Following the program, there was a musical performance by the United Nations International School Senior Chorus.