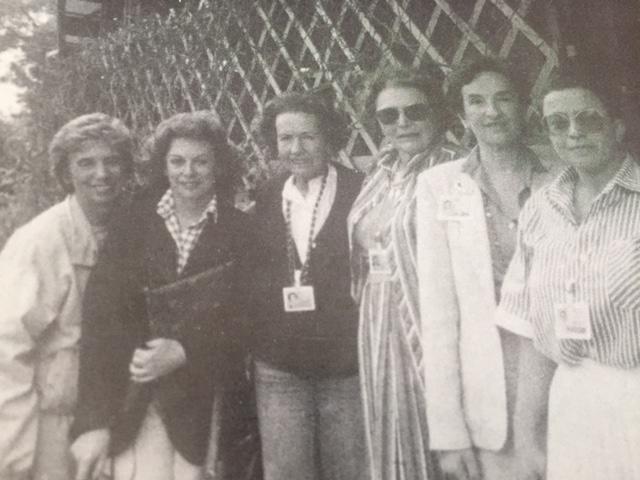 Dr. Nelly Las has updated the history of ICJW in the Jewish Women’s Archives, now renamed the Shalvi/Hyman
Encyclopedia of Jewish Women. She did so with help from many members of the ICJW Executive and Presidents past and present. You can read the complete article here: https://jwa.org/encyclopedia/article/international-council-of-jewish-women

The article includes many historic and recent photographs of ICJW activists, and video footage of Karmela Belinki speaking at the 43rd session of the UN Human Rights Council in Geneva in 2020.

In her conclusion, Dr. Las writes: “ICJW’s development over the past century has been very significant. Its history reflects general trends and major changes in Jewish society, in particular the evolution of the status of Jewish women in the Jewish communities, as well as the processes of solidarity at work in the Jewish world at large. Since the 1960s, the importance of non-governmental organizations in the United Nations and civil society has been irrefutably recognized. As a women’s NGO, ICJW participates in a variety of projects promoting women’s rights and children’s rights, combats elder abuse, and works for persons with disabilities, migrants and minorities according the UN principle of “leaving no one behind.” As an apolitical Jewish women’s organization, ICJW lobbies against BDS, antisemitism, and racism and fights anti-Israel bias.

Not content with promoting social aid and philanthropic activities, ICJW constantly initiates new projects, including training of volunteers, interfaith and inter-cultural women’s encounters, and health campaigns for women, under the banner of Judaism and Jewish ethics. ICJW also continues to demand equal rights for women in the Jewish community and equality in marriage and divorce, and to support Jewish education. Committed to women’s human rights, including Jewish women’s rights, and Tikun Olam (repairing the world), ICJW is open to all Jewish women, religious and non-religious, in Israel and in the Diaspora.

Like many other NGOs, ICJW has been experiencing financial difficulties and faces problems of aging membership and leadership, an outdated structure and administration, and the end of an era of “professional volunteers.” In order to attract younger women who are combining career and family life, the organization is in the process of re-examining its goals, objectives, and projects. With modern technologies and new tools of communication, whether Zoom meetings, webinars, or social media, ICJW sees new opportunities to make the voice of Jewish women from all over the world heard.

More than ever, in spite of cultural differences and different outlooks, Jewish women of the different ICJW affiliates worldwide appreciate sharing common concerns and initiatives, exchanging ideas, and facing problems together. The challenge today is to rethink the way its international organization might inspire meaningful actions and advocacy to be carried out by the local affiliates and vice-versa.”