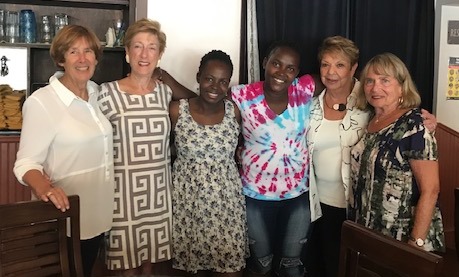 A few months ago, we learned that we had an ICJW affiliate in Uganda, and that two of our ICJW sisters would be working in a camp in the U.S. this summer. Would we like to meet them when camp was over and they were passing through NY? Well, of course we would! We set a date months in advance for August 19th and today was the day that those of us who were able met Hadassah Nakiza and Ruthy Muthoni for a lovely Israeli Druze luncheon on the UWS (Upper West Side in NY speak).

Fran Butensky, Judy Mintz, Joan Lurie Goldberg and I spent the most wonderful couple of hours learning about them, the Jewish community of Uganda, and our ICJW affiliate there. We also had a chance to share a bit about what we do at the UN.

The Abayudaya, Luganda for “People of Judah”, reside in 7 Jewish communities in Eastern Uganda near the town of Mbale. The population is estimated at about 2,000 to 3,000 who are mostly subsistence farmers like their neighbors. Hadassah and Ruthy are from the village of Nansenyi where our affiliate is located. They represent about 150 women who are Jewish, Christian and Muslim, and they make up the Union of Jewish Women Uganda. Hadassah is the President and Ruthy is the Secretary.

The synagogue is quite far from their village so they must either walk about 3-4 hours each way for prayers, or hitch a ride on a motorcycle. Virtually no one can afford a car. Rabbi Gershon is the spiritual leader of the Jewish community and during a food crisis a few years back, he was able to secure food from elsewhere. The Jewish community shared the food that was sent with all their neighbors. The girls explained that the Jewish community is respected for their warmhearted support, which makes for excellent relations with all faiths in the surrounding communities.

The Union of Jewish Women of Uganda fully supports the economic independence of women through the sale of their lovely homemade craft shop offers such as hand knitted kippot, table mats, beads and challah covers. They educate local women about women’s health issues, including cervical and breast cancer screening, HIV/AIDS screening and counseling, and hepatitis B screening. Other trainings discussed are vocational and college skills, and commercial modern agriculture and farming skills.

What a fabulous experience it was to meet these charming young women and to feel that we are truly Jewish sisters. They are hopeful that one day soon they will be able to attend an ICJW Executive Meeting somewhere and meet other Jewish women from around the globe!