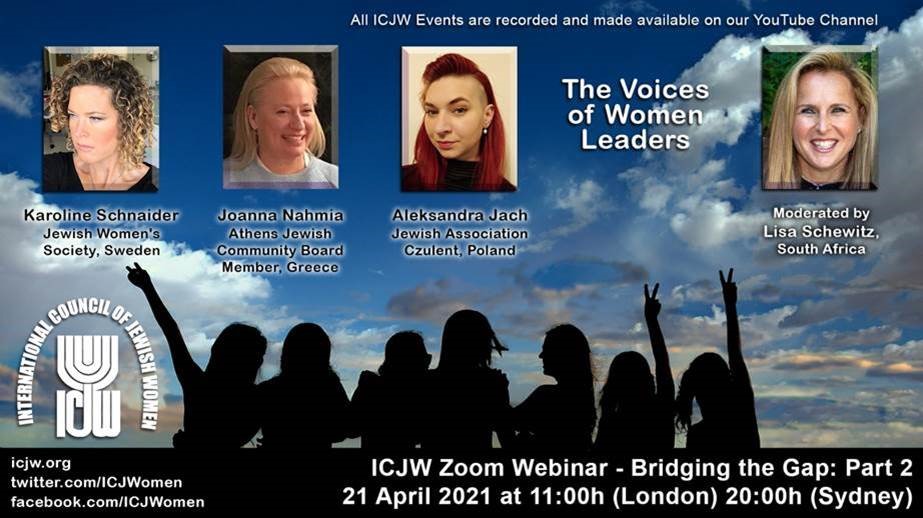 Here are the bios of the four participants:

Karolina Schnaider from JKS in Sweden

Karolina is involved with the JKS (Jewish Women’s Society of Malmo), which she initiated and co-founded, she has been intimately involved in Malmo’s Jewish community for a while. She is studying digital technologies in education, and researching meaning-making through technology use from a social semiotic multi-modal perspective, all this as well as raising three lovely daughters. In her spare time – if she has any – she is an avid runner, a participant in extreme sports and a gardener of note.

Aleksandra Jach from the Czulent Jewish Association in Poland

Aleksandra is a social activist, an expert on social engagement and human rights. She is passionate about strengthening political and civil organisations; promoting the engagement of minority groups; promoting tolerance and creating an attitude of openness towards the national, ethnic and religious minorities, and focuses on preventing antisemitism and discrimination, including cross-discrimination. Since 2019 she has been a board member of the Jewish Association Czulent, an ombudsman organisation, where she has focused on projects promoting ideas of an inclusive society; and she has helped to develop the educational tools for fighting antisemitism.

Joanna grew up in Athens as the daughter of an English mother and a Greek Holocaust survivor father of Spanish origin. She was always involved with the community’s youth; she was a founding member of one of Athens’ most successful riding clubs; and she became active in community affairs when her children, a son and a daughter, attended the Lauder Jewish Community School, the school which was established to ensure a Jewish future in Greece and help the children develop a strong, proud Jewish identity.  She joined the school’s committee in 2005, assisted the fund-raising committee, and currently serves her second term on the Board of the Jewish Community of Athens.

Moderator: Lisa Schewitz from the Union of Jewish Women in South Africa

Lisa has a BCom (Hons) in Economics and a B PhysEd (Hons) in Sports Science. Having been involved in community projects since her school days, today she owns and runs a large commercial property business in East London. She served on the   Governing Body of her children’s primary school for 10 years; she has been the Communications Secretary of the UJW in East London for 15 years; she sits on the Synagogue Committee and works with the elderly in the community. She and her husband have 3 children, two of whom are studying abroad in the USA and Israel.  In her spare time she enjoys mountain bike riding, road cycling, running and golf; and she is an afficianado of the world of Disruptive Innovation and technology in general.