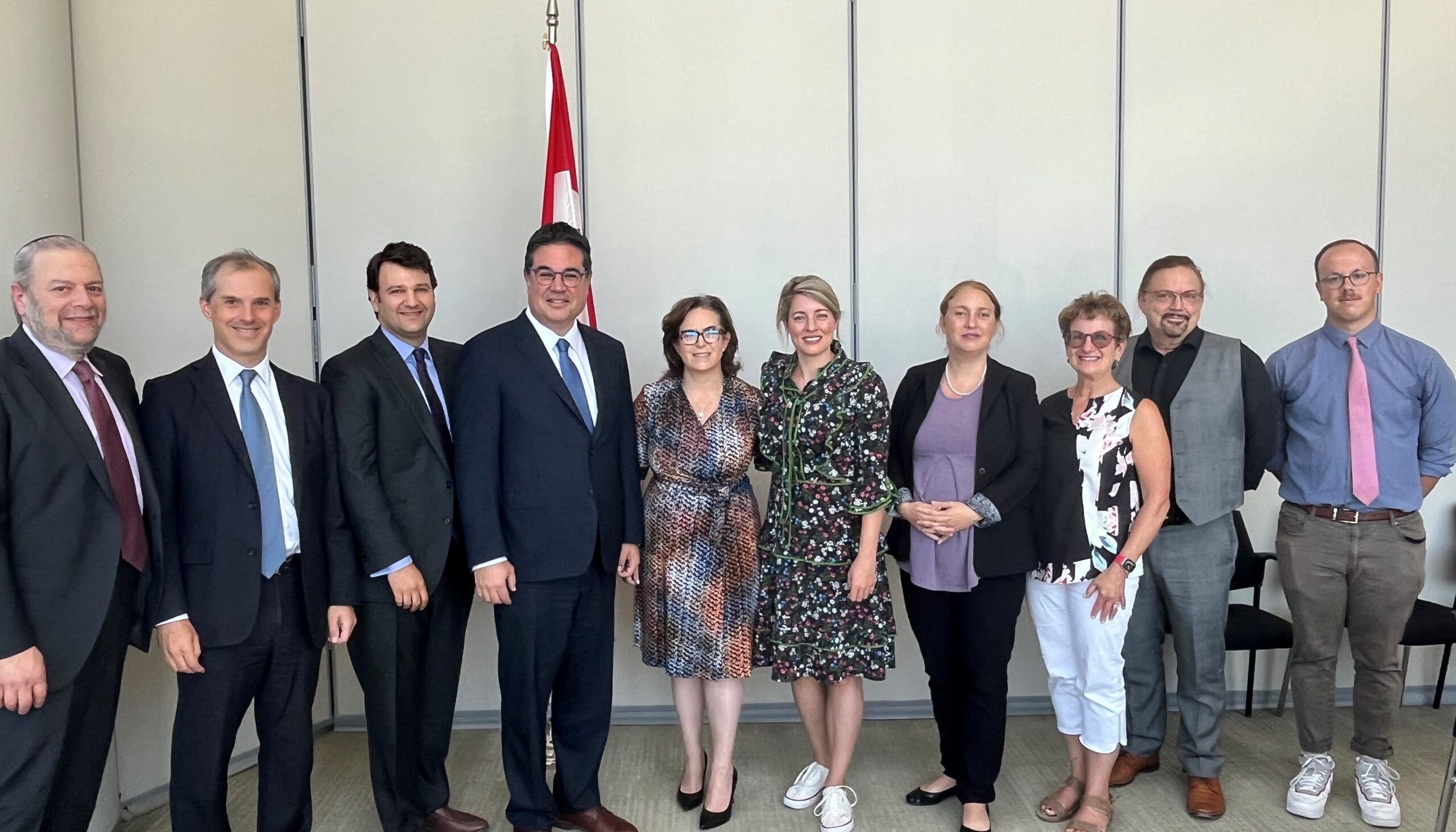 Debbie Wasserman, President of the National Council of Jewish Women of Canada (NCJWC), was invited to join a roundtable discussion about antisemitism with Canada’s Minister of Foreign Affairs, Melanie Joly. She reports:

“On Thursday, August 11, 2022, I was honoured to be invited by our member of parliament,  Ya-ara Saks, to a roundtable discussion with Canada’s Minister of Foreign Affairs, Melanie Joly, on Canada’s relationship with Israel.  It was indeed a privilege to be included in this discussion along with Noah Shack ( VP GTA from CIJA), Shimon Fogel ( Chief Exec Officer from CIJA), Steven Farber (Sr VP Countering Antisemitism and Hate – UJA Toronto), Adam Minsky (Pres and CEO of UJA of Greater Toronto), Jaime Kirzner-Roberts ( Director of Policy for Friends of Simon Wiesenthal), Dr. Carson Phillips (Assistant Director of Sarah & Chaim Neuberger Holocaust Education Centre) and Etienne Quintal (Online Hate Researcher for the Neuberger Holocaust Education Centre).  One thing was quickly evident.  Almost all the representatives of the Jewish community were men, besides Jaime Kerzner-Roberts and me!

“The table of participants was very small.  Many of the big players in the fight against antisemitism were there.  It is important to note that we, too, were at the table.  NCJWC was invited.  That we are recognized along with these other organizations is very significant.

“The discussion began with the government’s commitment to Israel but quickly led to a discussion about antisemitism in Canada.  I was the third person asked to speak as we went around the table.

“The position I took was to quickly acknowledge that NCJWC is concerned with the rising antisemitism in our country and we do take a stand to fight against it.  I recognized the great work organizations like those at the table are doing in this regard.  I said that we support these organizations and look to them for guidance.

“I explained that our position is taking small steps to make inroads in this fight.  I told them about our Woman to Woman initiative…working right now with Muslim women to educate them about our struggles as Jews while learning about their struggles as Muslims.  By getting to know each other we break down barriers. The response from the group was extremely positive and encouraging.  They acknowledged that this work is commendable and important.  This niche is unique.

“I emphasized that we wish to be the voice of Jewish Women of Canada and that our strength is working person to person.  I emphasized that when we require assistance in handling queries about antisemitism, we refer to the professionals around the table.

“The meeting was extremely informative.  Much effort is being put into fighting online hate, especially by the Neuberger Centre.  The close connection between CIJA and the government was definitely apparent.  Fighting antisemitism and other forms of racism is being taken very seriously by the government.  Having these organizations constantly lobbying certainly keeps this issue alive and makes it a priority.”

The women in the picture (from left to right) are Ya’ara Saks MP, Minister of Foreign Affairs Melanie Joly, Jaime Kerzner-Roberts from Friends of Simon Weisenthal, and Debbie Wasserman from NCJWC.